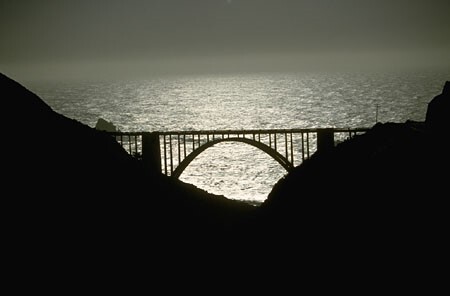 Safety and Stabilization for the Addicted

Erica is an attractive, 30-year-old woman who recently completed a 28-day recovery program for substance abuse.  Erica is a survivor of childhood abuse and has experienced sexual trauma as an adult. She has been in and out of therapy for years with a variety of therapists. She began using alcohol in her mid-teens as a way of coping with her feelings. Her use progressed as she became older and she eventually began to abuse prescription drugs as an adult. When Erica was in her late-twenties, she was raped in a park while jogging.  Shortly after the rape, Erica’s substance abuse intensified dramatically as this became her primary way of managing her fear, anxiety, nightmares, and the disturbing childhood memories that began to surface.

As she brushes her teeth this morning, she notices the color in her face.  Today she is able to look in the mirror with a sense of self-respect knowing that she is recovering from the deadly disease of addiction which she has been struggling with for years.  With newfound confidence and gratitude, she gets ready for work looking forward to the day ahead.

Her neighbor, Brad, is a teller at the bank with Erica.  A few months ago he was severely beaten while attempting to purchase drugs in a dangerous neighborhood.  The terror he felt during the beating and the subsequent consequences became a “bottom” for Brad. He began attending Narcotics Anonymous (NA) meetings and has been drug-free for two months now.   This morning Brad wakes up from having a dream about the night he was severely beaten. He has dreamt about how they robbed him of the large amount of money and how the assailants continued to beat him. He also dreamt of using cocaine again—a relapse.  Just yesterday he was talking to his therapist about how these “using” dreams had nearly ceased.  Last night’s was the first he has experienced in over a month and he is relieved that they are becoming rare.  As he gets into his car, he feels grateful that he is not using drugs or putting himself in dangerous situations any longer.

When Brad arrives at work, he makes a quick phone call to his girlfriend before the bank doors open.  She has been supportive throughout this process and has even attended some open NA meetings with him.  They plan dinner tonight.  At the same time, Erica makes a phone call to her sponsor with whom she has daily contact.  They agree to go to an Alcoholics Anonymous meeting this evening and then out for coffee.

This morning, Brad routinely assists each customer taking deposits and distributing money.  After lunch, Brad receives a large amount of cash to deposit. As he places the cash in the drawer, he starts to think about how many drugs he could buy with that amount of money.  This thought comes unexpectedly and he starts to fantasize about getting high again.  Brad shakes his head and thinks about the ridiculousness of this thought. He has been clean for two months now.  He shrugs off these crazy thoughts and attributes them to the extra cup of coffee he drank this morning, which is making him jittery.

At the next counter over, Erica looks up at her next customer, believing she recognizes the beard of the man who raped her.  She jumps back, but then quickly realized the customer is Mr. Martini, a longtime bank customer.  Even so, she begins to feel discomforted by an encroaching fear and disturbing physical sensations. She is feeling some of the same feelings she felt during the rape and is involuntarily remembering some of the events from this trauma.  She becomes so anxious that she is unable to finish the transaction and retreats to the break room. Erica feels upset and angry. She doesn’t understand why now that she is sober and supposed to be feeling healthier, she keeps having nightmares of the rape, shadowy visions of her childhood and experiences like she had today in the bank. She thinks, “These things never happened to me when I was drinking.”

What is it that caused these two individuals to react to these normally benign experiences in ways they did not choose? How were they, in one minute, coping well in their newfound recovery and, in the next, nearly debilitated?  In Brad’s situation, addiction professionals recognize these phenomena as becoming “triggered” and as “euphoric recall” which are considered relapse warning signs.  Trauma specialists would identify that Erica has experienced a flashback, or intrusive symptoms, from her previous trauma.  In both cases, we see how Brad and Erica react to situations in ways they did not want.  Brad had no intentions in the beginning of the day to fantasize about using cocaine and Erica did not intend to become incapacitated by the sight of someone whose beard reminded her of the man who raped her.  Prior to this, both were planning on a peaceful evening of continued recovery.

What has caused the ghosts of the past to haunt these two individuals in their early recovery?  Both perceived the benign events of their day as a threat—a menace to their survival–which activated their sympathetic nervous systems, or the “fight or flight” responses. Brad’s brief inflamed desire to use drugs was challenged by his knowledge that addiction is a serious disease and that if he used again he would suffer unwanted and possibly dyer consequences.  His mind perceived his desire to use drugs as a threat.  As this internal struggle escalates, tension and bodily discomfort are the result.  Often this tension and bodily discomfort create a desire to find relief.  For a long time Brad’s primary means of attempting to accomplish this has been drug use. In the past, cocaine had temporarily cloaked his awareness of his emotional and physical pain, providing him with temporary relief from his state of internal discomfort. Now, all the tragic consequences he suffered as the result of his habitual use begin to fade into the background as the drug siren ever more loudly promises relief.  He is trapped in the negative and painful quicksand of TraumAddiction.

Erica also perceives a threat when she sees the customer’s beard and involuntarily recalls her rape. When she was attacked one of the first things that she saw was the rapist’s beard.  Seeing someone with a minor resemblance to the man who raped her produced thoughts and images of the rape.  Even though she was perfectly safe at her job in the bank, she felt a life-or-death threat while she re-experienced the memories and sensations associated with her rape.  Erica too was suffering from tension and bodily discomfort that clamors for soothing and/or escape .  For years alcohol has been her most successful way of coping.  Shortly after this incident, Erica begins to think that a little wine might help her feel better.  She is trapped in the web of TraumAddiction. 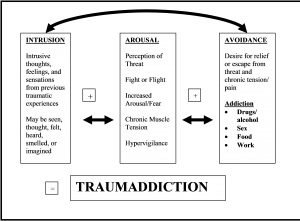 To learn more about addiction register for our Trauma and Addiction training here.